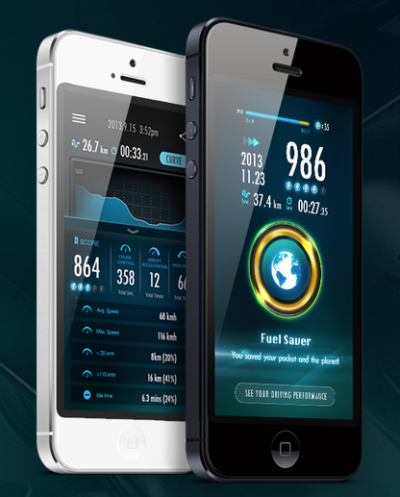 iOS app Driving Curve is an easy way to track your driving performance without having to fiddle with additional devices.

Some high-profile driving apps, like Automatic, a Y Combinator alum and Techstars-backed Dash, offer their own hardware to connect with smartphones. Other use a Bluetooth-enabled on-board devices (OBD), which plugs into an adapter under the steering wheel.

Driving Curve, on the other hand, is meant as simple alternative for people who are curious about their driving performance, but don’t want to deal with an OBD or a more complicated set of features just yet.

“All you need is a smartphone, which dramatically lowers the entry barrier and grows our user base quickly,” says Tim Huang, who founded the app along with Duoyuan Chen. “We focus on quantified human behavior rather than machine behavior.”

To use the app, you simply press its start button just before you start driving. It tracks your speed based on data from GPS satellites and the iPhone’s motion sensors.

When you arrive at your destination, stop the app and it automatically analyzes and records information about your acceleration, braking speed, fuel usage, and route distance.

Driving Curve’s founders are still working on a monetization model, but they say that the popularity of smartphones will allow them to collect data that can be useful for a wide range of companies.

While Driving Curve could potentially be used by insurers, taxi companies, and delivery services to make sure their drivers are following traffic laws, the app is mainly meant as a self-diagnostic tool with a gaming element.

You can collect points and badges for safe driving and compare your performance with other users. If you drive poorly, the app will dish out insults, like telling you that you drive like a bank robber, before giving you tips on how to improve your performance.

Since I live in a city and don’t own a car, I tested Driving Curve while taking cabs in Taipei and Seoul and found that it captures speed and distance traveled accurately. One of my rides got a “speed ninja” warning, even though the driver wasn’t going particularly fast. He did have to stop frequently because of rush hour traffic, however, which can wear out brakes.

The disadvantage of Driving Curve is that you have to be connected to the Internet for its GPS check-ins. On the other hand, it is fun and easy to use and I can see the appeal for people who don’t want to fiddle with another device in addition to their smartphone. It’s also great for backseat drivers (like me) who take taxis or ride-sharing services frequently and want to make sure that their drivers are not only driving safely, but also taking the most efficient routes.