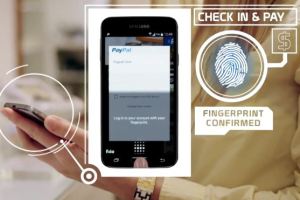 With the Samsung Galaxy S5 now available, PayPal is making good on its promise to use the handset’s fingerprint reader. Using the phone app, you can log in to your PayPal account with a fingerprint scan instead of a typed password and make payments online or at participating retail locations that access PayPal payments.

Until now, however, no devices were available to use the app. Here’s a short demonstration of how the PayPal app works:

The idea of using a fingerprint for account authentication over a typed password is rather timely, given how many sites are now affected by the massive HeartBleed security flaw may have exposed passwords on two-thirds of the world’s servers.

Clearly, neither PayPal nor Samsung knew this would happen when they announced the mobile payment feature in February. The situation could bring awareness to Samsung’s newest phone since it uses biometrics instead of a password. Even if that fingerprint data is stored on PayPal’s servers, they aren’t affected by HeartBleed according to LastPass.

Samsung’s newest handset isn’t the only device that can use a new PayPal new app, however. PayPal is available on the Samsung Gear 2 smartwatch and Gear Fit wearable so you can make payments, redeem offers and receive payment notifications on your wrist.