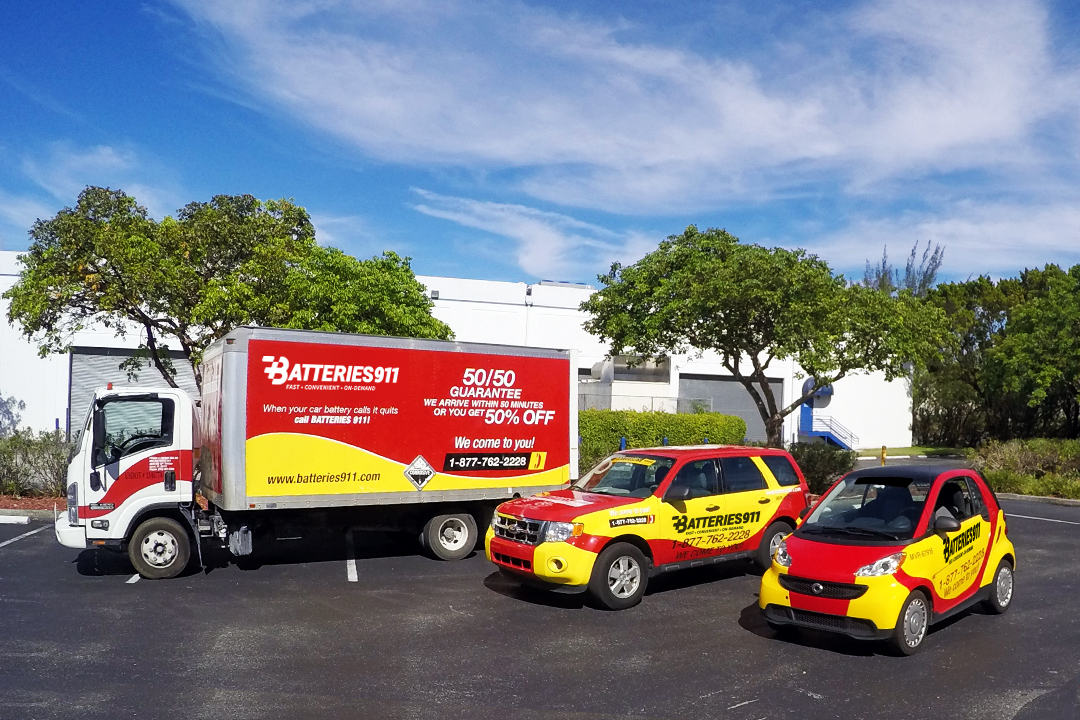 Dallas, Texas, October 30th 2017 – Batteries911, an on-demand, 24/7 car battery service, is rolling out its services across the U.S. The company utilizes a proprietary algorithm to offer the fastest and most economical mobile battery replacement service in America.

Thanks to its unique, last-mile delivery algorithm, Batteries911 is able to dispatch experts to a stranded motorist within 45 minutes of a phone call or web request. The company then diagnoses the car battery for free and replaces it on the spot. The technician’s location is trackable just like Uber, and the delivery and installation service is free. Customers pay on site using any major credit cards and never pay a membership fee.

“With Batteries911 people can get back to their lives within 45 minutes. This is why we have received so many positive reviews after our pre-launch in Florida,” said CEO and founder, Andres Angel. “People love it and feel like Batteries911 has really impacted their lives, and the customer experience is our primary goal. ”

Previously, the whole experience of being stranded with a dead car battery was pretty painful. People lose on average about three hours of their life and large sums of money towing their cars and waiting at a store for their battery to be replaced. With Batteries911, technicians go to wherever the client is in 45 minutes, at the same price it would cost to go to an auto parts store.

The norm of taking a car to a garage for a battery change dates back sixty years. Just as Amazon is trying to get products delivered to customers within two hours, Batteries911’s algorithm is making last-mile delivery more efficient for their technicians. Angel believes this technology could be applied to several other industries but decided to tackle the roadside service experience where he felt the technology would have the most meaningful impact on the customer experience.

“The issue of car battery replacement may at first appear trivial, but our market research and customer feedback shows our service allows people to get back to a positive experience during the day while saving precious time and money. As a result people walk away feeling very happy, and that’s not something people normally feel when resolving a dead battery issue,” added Angel.

“If you have ever waited for hours on end, or had to fork out hundreds of dollars to a tow-truck, you may just wish you had known about Batteries911.”

Batteries911 is a 24/7, tech-powered, on-demand car battery service. By having developed a proprietary last-mile delivery algorithm used in their platform, Batteries911 is able to rescue a stranded car with battery issues quicker than anyone else and with very competitive prices. Already operational in Florida, Batteries911 has raised $5 million in series A funding and is now in the process of raising a series B round to fund their U.S.-wide expansion.