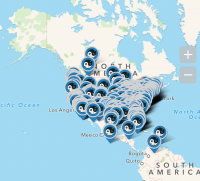 The mobile app, with users in 120 different countries, allows people to select another user anywhere in the world and ask a question, after which they receive a video or photo as response.

“The app was designed to cut uncertainty out of your day, just like the weather forecast does for weather, or Waze does for traffic. A user can ask, ‘Hey, could you take a pic of the Starbucks line-up?’ and get the answer right away. It would take 10 seconds to ask the question, 3 seconds for the person there to respond with a quick photo. And it could save you 20 minutes of standing in a line,” said CEO Sukhsagar Singh.

With an award-winning start-up and a mobile app with over 20 million downloads behind them, CEO Singh and COO Kaur have a proven track record when it comes to business. The uCiC app has already created interest; winning both the live and online competition in this January’s CES Mobile Apps Showdown in Las Vegas.

uCiC’s  versatile potential was uncovered in January at the height of the Ukrainian unrest. Using the app to reach out to a user in Donetsk, the uCiC team was able to receive photos and videos of the area, getting a first-hand account of what it was like to be in the middle of the crisis.

“Although uCiC has mainly been designed for everyday use, our experience talking to people on the ground in Ukraine shows that the app can answer the big questions too. We predict that this could well allow journalists to talk to people in inaccessible areas and disseminate their message to the world,” Singh continued.

The app’s diverse use ranges from requesting images/videos of the crowd at a club to trying to asking neighbours if they have seen a lost dog.

“We are addressing the global consumer smartphone market. uCiC is not just for kids, doctors, or music-lovers; it’s an app for everyone,” said Singh.